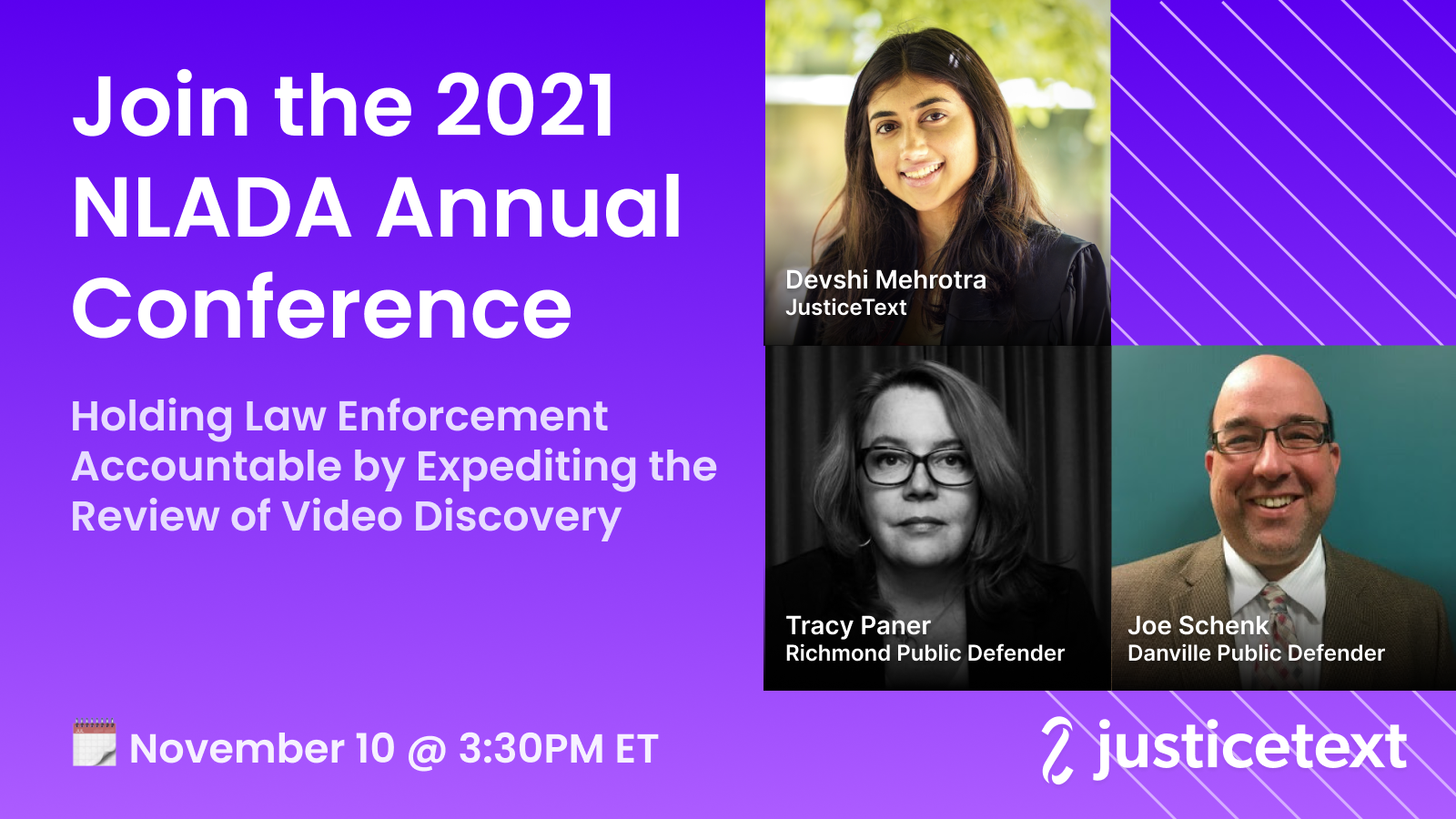 JusticeText CEO Devshi Mehrotra presented a workshop at the 2021 National Legal Aid and Defender Association (NLADA) Annual Conference on November 10. She sat down with Chief Public Defenders Tracy Paner from Richmond and Joe Schenk from Danville to discuss their experiences utilizing the JusticeText software to analyze high volumes of video and hold police accountable for misconduct.

In 2015, the Justice Department allocated $20 million to fund a nationwide body-worn camera implementation program — with the intended goal of enhancing accountability and promoting transparency within law enforcement agencies. However, according to a 2016 survey by George Mason University's Center for Evidence-Based Crime Policy, just 8.3% of state prosecutors' offices with body-worn cameras used the footage to prosecute law enforcement, while 92.6% of them used it to prosecute private citizens. This brings into question the efficacy of the program as an accountability measure.

Furthermore, this funding for equipping law enforcement agencies with body-worn cameras was not complemented by a similar investment in building infrastructure to store, catalog, review, and share video within indigent defense agencies. The increased workflow created by body-worn camera footage burdens public defense agencies who must now spend hours reviewing and redacting video. Virginia’s Commonwealth’s Attorneys’ Offices and Public Defender Offices have been particularly outspoken about the need to alleviate the undue burden of reviewing voluminous video evidence. “It’s astronomical the hours of body camera that we receive,” Paner shared. “I had a search warrant case with eleven different videos, and I had to watch nine of them to find anybody finding any drugs. So it was really a huge time suck.”

In spite of the challenges, both Paner and Schenk emphasized the importance of leveraging video evidence in their cases, especially in the face of often unreliable police reports. Paner shared that “[the officers’] summary of what happened [...] just doesn’t give us the true picture of what happened.” She went on to explain that “without the video, [the judges are] going to always believe what the officer has to say.” Adopting the JusticeText platform, however, has better equipped her attorneys to use body-worn camera footage to challenge the officer’s credibility on the stand. Paner is finding that the increased use of video evidence in court is leading judges to regard officer testimony with a greater dose of skepticism than before.

Body-worn cameras have been deployed in Danville since 2012, but it is only recently that public defenders have been truly empowered to analyze the voluminous footage in defense of their clients. “The body cameras can really hold the officers accountable,” Schenk explained. “It’s almost as though you’re doing a culture shift in the police department and making them be honest about their reports because officers don’t want to look foolish in front of a court.”

Beyond saving valuable time, JusticeText has also helped public defenders be more effective in court by providing a centralized location to store notes and video clips. Schenk, who has extensively used the video clipping tool, said "There is no awkwardness of fumbling through saying judge, give me one second while I cue the video up and you don't have to worry about not starting on the right spot, you just go right to it."

It is only when public defenders are equipped with resources to efficiently digest video evidence that increased surveillance truly leads to greater police accountability. Listen to our full conversation with Virginia's public defense leaders below: